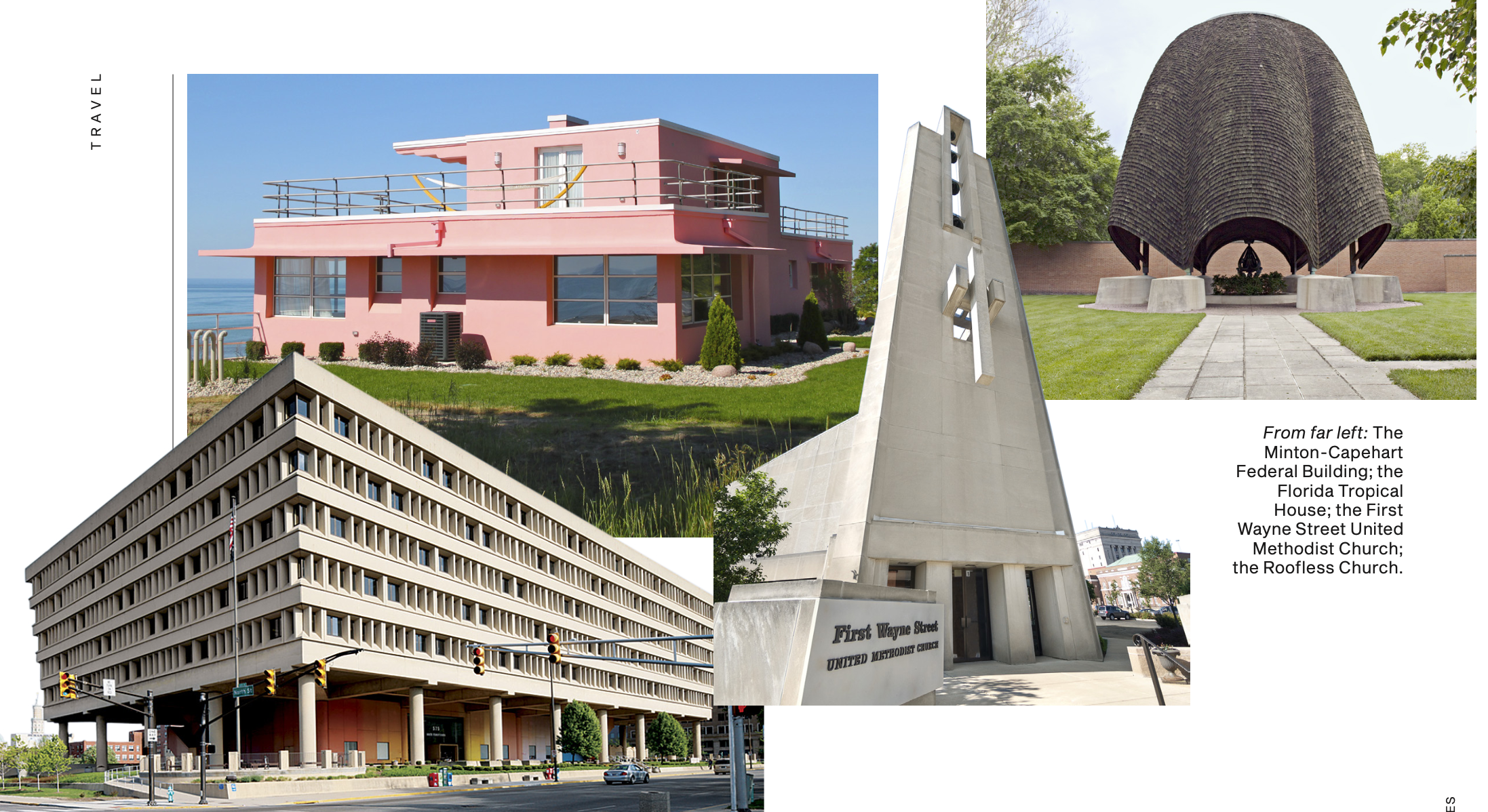 Posted at 10:16h in Uncategorized by Rima Suqi

I’m posting the unedited copy here, since there was only room for about half in the Magazine, and so many people have been asking for more information. Go to Indiana!

The Midwest has a lot to offer for architecture fans and, as a journalist who grew up in Chicago and has written extensively about design, I thought I had a pretty good handle on what was where. Until I was asked to create a single state road trip itinerary of “greatest hits” and surprises. Chicago and the environs were an obvious choice, Wisconsin for all things Frank Lloyd Wright, Michigan for the iconic names that were affiliated with Cranbrook and Herman Miller. But Indiana won. With the exception of Columbus (more on that later), it’s a state that is often overlooked. But after spending six days driving over 1,200 miles, stalking dozens of buildings, I’m embarrassed that I hadn’t known many of them existed and have become a superfan of the Hoosier state as a design destination, whether driving or not.

My itinerary started and ended in Chicago and traversed the state in a boot-shaped route that bore an uncanny resemblance to Italy; beyond that, the only similarity I found was the  surprising number of vineyards (there are about 100 in the state).

I began by driving a little over two hours to  West Lafayette, home of Purdue University and birthplace of Axl Rose where, at the end of a quiet residential block, I encountered a bright turquoise gate marking the entrance to Samara House, one of the most complete Frank Lloyd Wright homes in the country. The home, commissioned by a Purdue professor and his wife, dates to 1956 with furnishings, lighting, tableware, linens and even the couple’s stationery designed or specified by Wright himself. A tour revealed quintessential Wright details including hidden storage, clerestory windows, a carport, and well as a several large Paolo Soleri bells suspended from the overhanging eaves. It’s also about ten minutes from one of Louis Sullivan’s “jewel box” bank designs, a diminutive 1914 brick building, with gorgeous green tiles framing the windows and the doorway, which currently houses a Chase ATM.

On the way into Indianapolis, where I’d be spending the next two nights, I drove through Butler University’s campus, which has several modernist buildings including a library by Minoru Yamasaki, architect of the original World Trade Center towers, and Clowes Memorial Hall, a theatre housed in a brutalist building by John Johansen (who once worked for Marcel Breuer) and one of his former students, Evans Woolen III, who is credited with introducing Brutalism to this city. Evans also designed the Minton-Capeheart Federal building here, which was the first of many “who knew” moments for me, as it has the  “Color Fuses” mural by Milton Glaser installed along the exterior perimeter.

There’s so much interesting architecture in Indy that it could easily warrant a dedicated trip. A-listers Deborah Berke, Kevin Roche (former principal designer for Eero Saarinen) and Michael Graves have realized buildings here. Other notable structures are a testament to history, from the Walker Theatre (former headquarters of Madam CJ Walker haircare and beauty products and now a cultural center run by her foundation) to Crispus Attucks High School (the first public high school for African Americans) and the Indiana War Memorial, an imposing neoclassical monument that anchors a 25-acre plaza that’s this city’s answer to Central Park.

Indy was a real eye-opener, and set the tone for the rest of the trip. I made a quick stop in Evansville to see a sweet, 550 square-foot house by Frank Lloyd Wright protégé Wesley Peters, said to be the precursor to Wright’s Usonian designs, before continuing on to New Harmony.

This small (population about 800) town, where many residents get around via golf cart, is perched on the Wabash River just two hours from Louisville, KY. It’s also the unlikely location of an interdenominational church designed by Philip Johnson and an Athenaeum by Richard Meier, thanks to Jane Blaffer Owen, whose husband was a descendent of the town founders. Blaffer, an oil heiress from Houston whose family has a museum there, fell in love with New Harmony and dedicated her life to its preservation and revitalization, earning many accolades along the way, including Commander of the British Empire, bestowed by Queen Elizabeth II.

Johnson’s Roofless Church debuted in 1960, and sits on a serene, landscaped site accessed through gilded bronze gates by French sculptor Jacques Lipchitz, whose The Descent of the Holy Spirit occupies a place of honor under the church dome. Across the street is a park dedicated to theologian Paul Tillich, created by Zion & Breen, best known for their work on MoMA’s sculpture garden [RS NOTE: they also did Paley Park]. Meier’s Athenaeum, completed in 1979, stands in stark, white, post-modern contrast to the rest, at the end of that same tree-lined street; it houses the town’s visitors’ center and history museum. Owen’s foundation, named for her father Robert Lee Blaffer, owns several buildings in town; I spent the night in one opposite Johnson’s church, in a room where the architect himself once slept.

The next morning, after a meditative walk through the manicured privet hedges of the Harmonist Labyrinth, I set off for Columbus, considered by many to be the architectural mecca of Indiana. It was two hours on highway I-65, a stretch of which had been renamed “John Mellencamp Way” before I drove over the Stewart Bridge – a suspension bridge with 40 cables held up by bright orange A-shaped pylons — and into the town that somehow birthed both Vice President Mike Pence and fashion designer Stephen Sprouse.

Columbus is an anomaly because it has over 90 buildings and public art works by internationally renowned architects and artists, despite having no major university or museum (at the time) that would normally commission or fund such projects. But it did have Joseph Irwin Miller, a long-time executive at Cummins (a diesel engine manufacturer) with a company foundation that agreed to fund public buildings provided they were designed by notable architects. This set off a wave of urban development unheard of for a town of this size, resulting in a City Hall designed by Charles Basset (of S.O.M.), libraries by I.M. Pei and Deborah Berke, fire houses by Robert Venturi and William Rawn, a hospital by Robert Stern, a mall by Cesar Pelli and churches by Harry Weese and Eliel Saarinen. There’s so much architectural eye candy here that, during non-pandemic times, the city offers a variety of tours of all this and more, including Joseph and his wife Xenia’s home, designed by Eero Saarinen with interiors by Alexander Girard.  While the timing of my trip meant limited or no interior access to these iconic structures, I was able to embark on an architectural treasure hunt and see most of them by car.

The final 24 hours of my journey were action-packed. I had seen pictures of an insanely large Art Deco church located in the small town of Versailles (here pronounced Ver-sales) and, despite the odd detour required, had to check it out. Tyson’s United Methodist Temple was built in 1937 by James Tyson, co-founder of Walgreens, as an homage to his mother. This gleaming structure with soaring openwork steel spire was an anomaly in an otherwise lifeless town. The doors were locked, a proverbial blessing in disguise as I had to high-tail it to Fort Wayne.

The second largest city in Indiana, Fort Wayne is home to Concordia Theological Seminary, a 191 acre campus designed by Eero Saarinen and the Arts United Center, Louis Kahn’s only building in the Midwest. The campus, which Saarinen laid out like a Scandinavian village with church as focal point and other buildings (a dining hall, library, gym and dorms) arranged around it, has beautifully landscaped grounds by Dan Kiley, one of the go-to landscape architects of that era, best known for the Gateway Arch National Park in St. Louis. My tour saved the best for last: Kramer chapel, with its iconic 97-foot-tall bell tower. Saarinen’s minimalist design features a free-standing alter made from a single six-ton slab of marble and light filtering in through a sliver of an angled skylight.

Kahn’s performing arts center, on the other hand, is a brutalist structure in the middle of town with a face-like façade that was allegedly not intentional. The monolithic building debuted in 1973, just a year before his death, and was the only structure realized in a plan that was intended to mimic Lincoln Center, with dedicated buildings for various performing arts. Today it’s home to the Fort Wayne Philharmonic, Ballet, Civic Theatre and others, and a popular event venue with spaces located behind the eye-shaped windows.

My final stop was Beverly Shores, a resort town on the shores of Lake Michigan that is the unlikely location of 5 homes purchased by a developer who spotted them at the 1933 World’s Fair in Chicago and floated some over by barge. They’re all landmarks, located on the same block, and currently leased to individuals who go through an extensive vetting process for the right to live in these historic properties in exchange for agreeing to maintain them. They range from the bright pink “Florida Tropical House” to the octagonally-shaped “House of Tomorrow,” originally designed with an airplane hangar.

Back in Chicago, I became obsessed with becoming one of the Beverly Shores chosen few, but it was not meant to be – both financially (a $2 – $3 million investment with no tax breaks) and practically, as RFPs for House of Tomorrow had closed. Thankfully, these beauties are only an hour’s drive from the city, so I can revisit these, and many other sites on this trip, fairly easily.