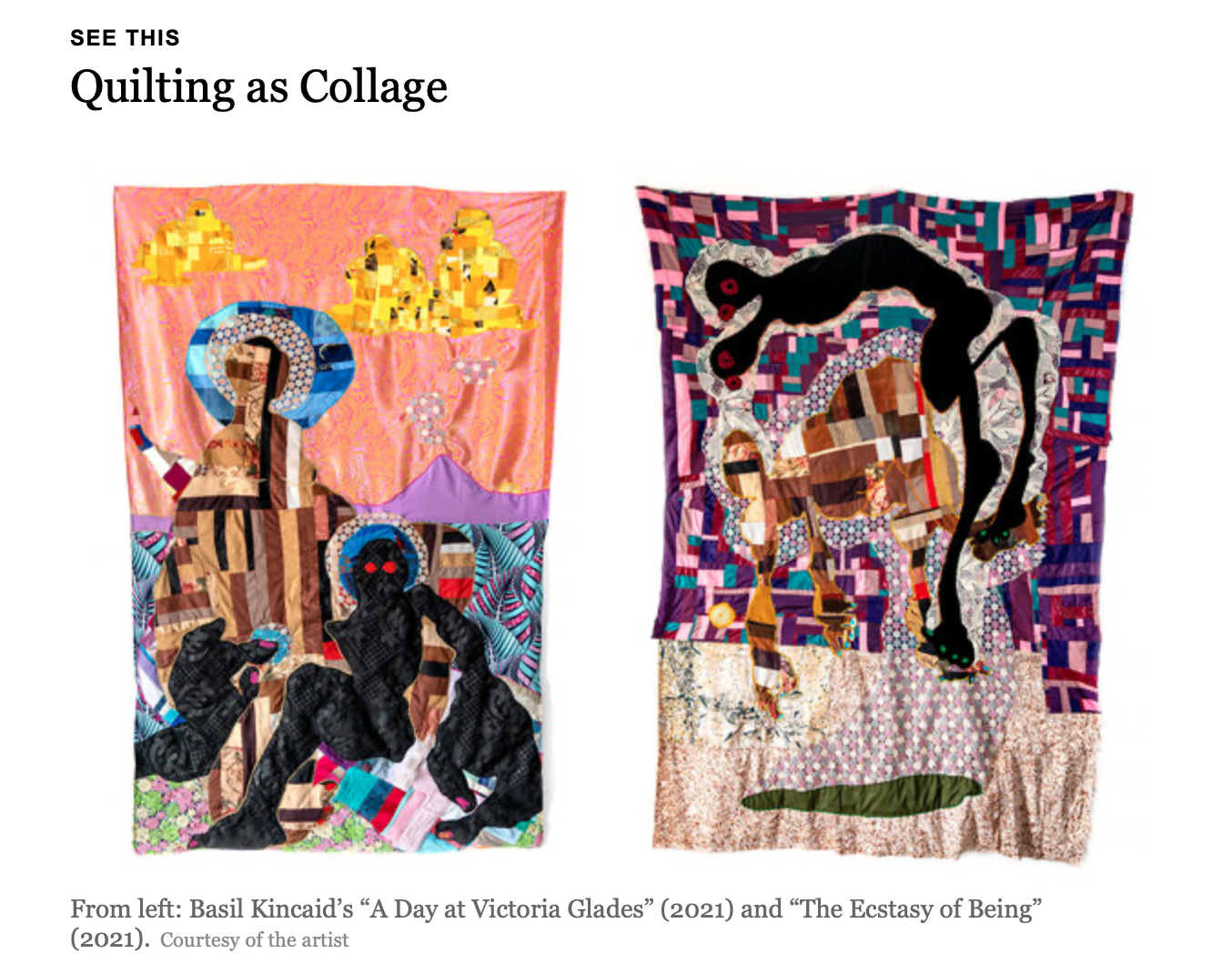 Posted at 07:33h in Uncategorized by Rima Suqi

Five years ago, I was visiting a friend in St. Louis who introduced me to a young artist named Basil Kincaid. At the time, he was fresh off a 9 month-long residency in Ghana where he created rectilinear, collage-style works influenced by quilts, and was starting to experiment with making his own. He later told me that, prior to his exploration of quilting, he “had made a lot of art that focused on black pain and suffering. I realized I didn’t want to make art like that anymore and I wanted to focus on joy. The mixture of my interest in creating and focusing on joy and love coincided with my interest in my family tradition and realizing there had been an unbroken link of generations upon generations of quilt makers in my family.”

Kincaid had never sewn before, but when he started, spurred on by a dream he had where his grandmother encouraged him, “it was like I had always known how to do it.” The materials he uses, and the ways he collects them, are as important to him as the process and the final result. Some of his first quilts, which he’d refer to as “self -portraits” were made from his and his family’s old clothes and other materials; he’d also source donations of fabrics using social media, and received “emotionally charged” materials from all over the country. “Focusing on resourcefulness is one of my main drivers of my art practice,” he said. “When you look at black people around the world, they’re resourceful people. We have to make do, and it makes you more creative.”

Flash forward and Kincaid, now 34 and once again living in Ghana, is one of this year’s recipients of the prestigious United States Artists Fellowship, has a solo show of quilts and a selection of pen and ink drawings opening this week (September 14) at Galleria Poggiali in Milan.

Kincaid used very time-intensive collage techniques to make the quilts in the show, entitled The Rolling Fields to My House, first making individual quilts as his “palette” and then cutting and assembling those to make new, larger, compositions. He began making them while still in the United States and finished them in Ghana, using materials collected in both places, including Ghanaian block print and embroidered fabrics, Kente woven on a traditional loom, curtains, vintage corduroy, donated clothes and Kincaid’s own clothes, and enlisted a local master embroiderer to help realize his line drawings on the fabrics.

The resulting pieces have a “juxtaposition of jagged shapes and luscious folds of the fabric” representing, in part, his experiences as a misunderstood and frustrated young black child in a predominantly white school. “The sharp angles are like a retractive blade, if that makes sense. Trying to remove anger, but I feel like it’s a valid emotion and a valid tool when you learn how to feel it and then relate to it,” he noted, adding, “I was also trying to retrace my process of inventing my own worlds. I feel like they coincided, because when you feel ostracized from normal reality you start creating alternate realities.”

Kincaid has described his quilts as “alive, living things,” and the creation of them a way to connect with his ancestry and continue a family and cultural tradition. But upon reflection, and therapy, he’s realized they’re about much more. “At first the art was like a shield and now it is a blossoming thing, opening up and impacting other people,” he revealed. “I feel like what started as an insular thing is now something that can bring people together to have some potential beyond just the safety net it provides for me.”