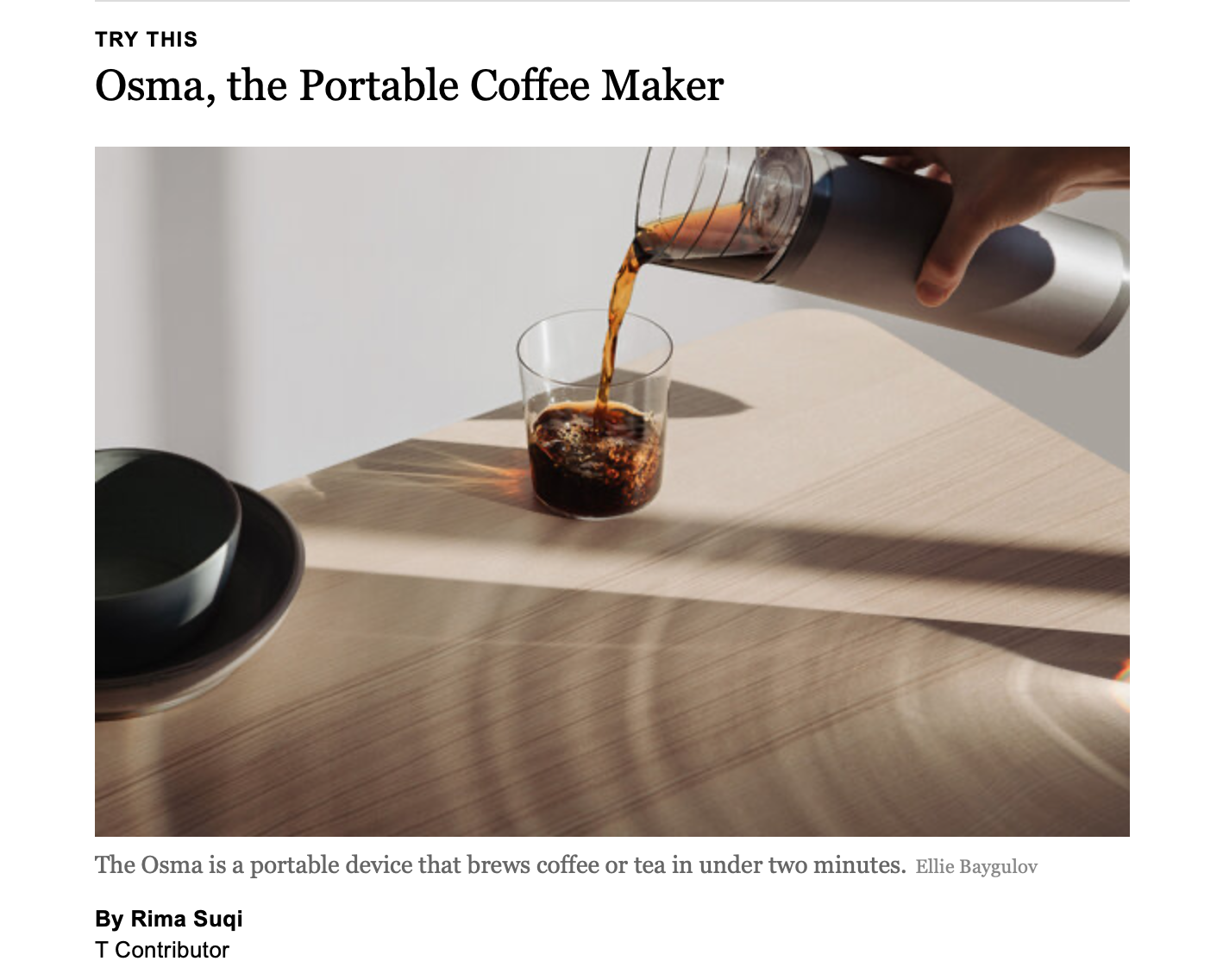 Posted at 14:26h in Uncategorized by Rima Suqi

“I didn’t want to create another device that required a large amount of real estate on someone’s countertop,” says Joey Roth, designer of Osma, a sleek new machine that brews hot or cold coffee or tea in under 2 minutes. “I wanted it to be portable, and to look at home on various surfaces in your home and workspace.” Osma, two years in the making, is Roth’s second design in this space. His first was the very modernist Sorapot tea pot, designed while he was still a student at Swarthmore; it launched in 2007 and an updated version debuted in 2014.

Roth, who admits to an ongoing “obsession with design for tea and coffee,” partnered with Dan Yue, a friend from college, to create Osma and bring it to market. (Yue is co-founder of both Playdom, an online gaming company and, more recently, of Brava Home, makers of a DTC countertop oven, where Roth worked as head of design). Osma weighs just 1.5 pounds and can easily move from home to office to outdoor space, and brews coffee and tea using biodegradable pods developed in collaboration with Chromatic coffee (with a tea pod partner to be announced shortly). These can be purchased online or through the Osma app, with new coffee and tea varieties added weekly. Unfilled biodegradable pods are available for those who prefer to use their own coffee, tea or herbal blends.

In my informal test, Osma was very easy to use and highly entertaining. Insert the pod, pour six ounces of whatever temperature of water you prefer (from ice cold to boiling hot) into the top container, set the brew strength via the app, hit a button and watch as the magic happens. “Our technology cycles water from the cup at the top, through the pod and back into the cup, looping continuously as the water extracts more and more flavor and aroma at every pass,” explained Roth of the process. “That’s how we’re able to extract a cup of coffee in under a minute.” The continuous loop process is evident in the clear cup on top of the machine, which at various points is gently rippling or theatrically bubbling and, ultimately, changing in color as the coffee or tea brews.

As an avid cold brew drinker, I am generally not excited about hot coffee, but the six-ounce cup I made using the Jose Maria dark roast was surprisingly layered and delicious and has now ruined me for other hot coffees. “Our system extracts coffee that’s a little stronger than a traditional brewed cup, but gentler and smoother than pulled espresso,” noted Roth.  I used the same dark roast to make a cold brew that was much more of a flavor journey (versus a boom! rocket fuel experience) than any other cold brew I’ve had, in a very good way. Roth described it as “more nuanced. If you listen to music at a high volume, you don’t get the same frequency range as you do with lower volume. That’s what’s going  on here. It’s more balanced.”

$185 for Osma, the power cord and twelve pods. DrinkOsma.com